The Brass Bucs Cabs Challenge is on! Now’s your chance — from July 12 to Aug. 23 — to support Minnesota Brass in a friendly fundraising contest with our East Coast DCA friends, the Buccaneers of Reading, Pa., and the Caballeros of Hawthorne, N.J.

All proceeds raised through fans of Minnesota Brass will go toward the corps’ new uniforms. A donation of $100 will buy a pair of pants, $250 a jacket and a shako and $500 a whole uniform. But any donation of $10 or more will gladly be accepted. You can give the effort an extra boost by sharing a link from the donation page on social media, because each share generates an average of $18 more in donations. The corps that raises the most money will earn bragging rights, but — really — all the corps are winners once the generosity of our supporters is tallied.

Make a difference! Support Minnesota Brass in the BBC Challenge. Trumpet player Marissa Moeller’s corps necklace shows that she has finished one season with Minnesota Brass.

When Minnesota Brass takes the field this season, members are wearing more than new uniforms — they’re also proudly bearing a new tradition in the form of corps necklaces. The neckwear was presented for the first time to performers and staff members at last fall’s end-of-season banquet to denote how long each person has been with the drum and bugle corps. But for corps director Eric Molho, the necklaces mean much more than that. “It’s important for all of us to have tangible, meaningful reminders that we’re all part of one organization — and many of us refer to that organization as a family,” he said. “The necklace helps serve as a reminder across different ensembles, different seasons, different sections that we all share a common experience and common connection.” To create the necklaces, Molho enlisted the help of baritone/euphonium section leaders Jacob Welle and Sam Springer, and Linda Belcher of the support staff. The trio drew inspiration from similar efforts from DCI corps such as Spirit of Atlanta, the Madison Scouts and the Colts of Dubuque, Iowa — all of which count Minnesota Brass members among their alumni. “We looked at a few websites to find a ‘look,’ something that was meaningful to us,” Springer said. “But truth is our logo was what we valued most.” Their efforts resulted in necklaces that featured a large center bead with the Minnesota Brass logo on a black cord, along with a variety of beads with meanings depending on color and style: A close-up of the Minnesota Brass corps necklace. Trumpet player Kurt “Flash” Schiebel wears a necklace that shows he has been with the corps for 28  years.

Now, thanks to the corps necklaces, members can carry around a little part of Minnesota Brass wherever they go. “For each individual, the necklace is now something every member has to signify their experience,” Molho said. “While many of us have jackets and all of us have memories, the corps previously did not make sure that every member had a memento, a reminder of what it is they have accomplished as an individual performer. Hopefully, the necklace will be a source of pride as people recall their own hard work, commitment to excellence and positive experience with the corps.”

(Any Minnesota Brass alumni who are interested in getting a necklace representing their involvement with the corps should contact alumni@mnbrass.org.) 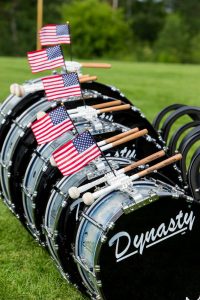 Minnesota Brass would like to wish everyone a fun and safe 4th of July.

The corps will be marching in the Delano 4th of July Parade which starts at 10:30AM Friday. Come out and see the snazzy new parade uniforms.

If Apple Valley is closer to your home, you’re in luck, as the corps is pulling double duty and will also be marching in the Apple Valley Freedom Days Parade, which starts at 1:00PM.

Hope to see you out on the parade route!