Minnesota Brass seeks a consultant or consultants to assist in gathering input from stakeholders and experts regarding the future of our performing ensembles.  The consultant will be required to complete the following tasks outlined in the request for proposal.

Work will be conducted in June-August, 2018.

We are committed to listening to and learning from key stakeholders including alumni, staff and music educators.  To assure consistent, unbiased data-gathering, the consultant will be responsible for gathering feedback and summarizing input.  The full RFP is available online and proposals are due June 8, 2018. Check it out! May 18 Launch Event for SoundSport/Drumline Battle

Our launch event for potential new SoundSport AND DrumBattle ensembles will be this Friday, May 18 at 7 p.m.  The event will be held at 2700 Winter Street in NE Minneapolis (the ‘Sears rehearsal site’ familiar to MBI alumni).  Potential members in any section including brass, percussion and color guard should plan on attending.  This will be a great opportunity to meet key members of the staff and prepare for a fun summer moving and playing.  Please complete an information form as soon as possible to indicate your interest!

As previously announced, Minnesota Brass is excited to explore launching a new SoundSport ensemble to perform at regional events and the DCI World Championships in Indianapolis.  If interest warrants, a DrumBattle ensemble may also be launched for percussionists!

Joel Matuzak will lead the program design for both ensembles.  Brass instructors include Paul Terry, Mark Santori and John Devine.  Jordan Warfield will provide leadership for the visual program.  Trevor Alwan will serve as director of the ensembles coordinating staff and administrative needs.

The schedule for the SoundSport unit will require regular Friday night rehearsals and some weekend performances.  The DrumBattle ensemble will rehearse on Saturday with weekend performances as well.  The launch of both ensembles will be contingent on the interest-level and participation commitment of prospective members.  Questions?  E-mail Trevor! Get your daubers up — MBI bingo returns

After a break of nearly six months, Minnesota Brass bingo returns to action on Saturday, April 7, at Stout’s Pub and Grill in Falcon Heights.

With the 2018 season well underway, MBI’s favorite fund-raising event is taking place at a new time and place. Stout’s is located at 1611 Larpenteur Ave W., just west of the intersection with Snelling Avenue and north of the Minnesota State Fairgrounds. We’re also moving the game to the first Saturday afternoon of each month, with games beginning at 3 and running till 5:30. Please arrive around 2:30 to purchase your packets.

In addition to bingo, MBI hosts a pull-tab machine at Stout’s. The machine is always available for play. 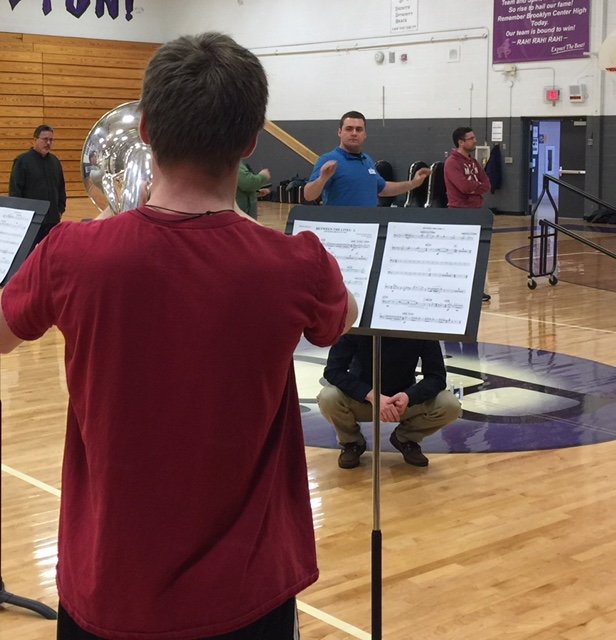 “MBI is an organization I have wanted to be a part of for some time, but because of school and proximity, I couldn’t make it happen. I’m very excited to finally be a part of the group!”

Khwice of Chaska, Minn., grew up in nearby Victoria and played at and graduated from Chanhassen High School. He topped a field of 12 candidates who expressed interest in the position, according to Brent Turner, himself a former drum major of the corps who conducted the auditions. “Sam was chosen for his positive energy and dedication to MBI,” Turner added. “He is a leader in the true sense of the word: always prepared, comes to rehearsals early and stays late. He is going to be a great continuation of strong drum majors for MBI.”

Khwice’s appointment was announced to the corps’ membership at the Feb. 24 weekend camp, where a looming winter storm curtailed attendance among brass players, while the guard and percussion sections were off preparing for winter competitions the same day. That didn’t keep a trio of brass rookies from showing up.

French-horn player Andrew Resch first encountered MBI at the Vikingland Marching Band Festival in Alexandria, Minn., at which the corps annually presents both a field performance and marches in the event’s huge parade.

Noah Koep first saw the corps perform at DCI Minnesota and, with the encouragement of his high-school band director – MBI alum Joe DeLisi – will be playing mellophone this summer.

And trumpeter Patrick Marrs, who is a Little League umpire and encountered Minnesota Brass at a performance in conjunction with Super Bowl LII held in Minneapolis earlier in the month, is also taking his band director’s encouragement onto the field.

All three expresses similar hopes for the coming season: to improve their playing chops, become better marchers and, universally, “have a great time this summer with some amazing people.”
Shouldn’t be too difficult to achieve that goal.